Some speak of Crypto Wars 2.0. For others the Crypto Wars have never ended. FBI Directory James Comey does not get tired of demanding back doors to IT infrastructure and devices (there is no difference between back door and front door, mind you). Let’s take a step back and look at the threats. We did this in 2011 with a talk by Duncan Campbell titled How Terrorists Encrypt. The audience at DeepSec 2011 was informed that encryption does not play a major role in major terror plots. What about today? Have terrorists adopted new means of communication? Since the authorities demanding access to protected information do not have statistics readily available, we turned to researchers who might answer this question. Julie Gommes will present the results of studies analysing the communication culture of criminal groups. In order to distinguish criminal acts from religion, we have put some words in quotes („“). We do not wish to whitewash crime by calling it religion. We ask you to bear this in mind when reading Julie’s summary and when attending her presentation.

Cryptography, social networks – today the use of online tools also serves to protect the communications of terrorists and to affirm their membership in terrorist organisations. The Internet is the method of choice for communication: the number of sites calling for a „jihad“ rose from 28 in 1997 to over 5,000 in 2005. The basic use of these sites for the purpose of basic classical communication began in the 2000s. It was replaced by that of social networks, allowing almost instant mass communication.

Studies of the Middle East Media Research Institute (MEMRI) show that Al-Qaeda uses encryption tools for a long time: „Since 2007, Al Qaeda’s use of encryption technology has been based on the platform Mujahideen Secrets, which has incorporated the support for mobile, instant messaging, and Macs.“ Encrypting communications was only done for emails and within the „Mujahideen Secrets“ platform itself.

However the year 2013 was a turning point in the spread of encryption: instant messaging in February with Pidgin, SMS in September with Twofish encryption, AES encrypted texts on web sites in December. Edward Snowden’s revelations, which began in June 2013, are not the starting point of the „cryptodjihad“ but seem to have acted as an accelerator.

MEMRI’s researchers demonstrated the use of public cryptographic tools stemming from the family of Free Software: Pidgin instant messaging tool similar to MSN allows the terrorist movement Asrar al Dardashan to encrypt their communications with OTR (for off the record).

By analyzing the adoption of new tools and the use of Free Software, we see that the focus is on cryptography for mobile tools.

Since everything that looks suspicious is branded as a nefarious cyber weapon (including calc.exe), we believe that everyone should listen to Julie’s talk. The field of information security entered the delicate terrain of politics a long time ago. It’s time to catch up. Start with encryption. While you are at it, don’t forget to follow the Crypto Wars to keep your front doors safe. 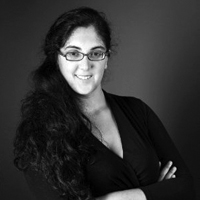 A journalist who is coding and speaks to her computer with a command line. Julie Gommes has worked for editorial print, web and radio before becoming a trainer in the drafting of a French newspaper in Laos, teaching journalism in Egypt and gaining Infosec experience during revolutions in Egypt and Syria. For several years she’s been studying the „jihadist“ movement and the rise of anonymisation and encryption techniques in the Middle East and is the author of a book about the revolutions in several of these countries “There were once revolutions” (Ed. The Seagull, 2012). Julie now works in particular studying international conflicts on the Internet, teaching security for journalists and participates in some groups in France fighting for NetNeutrality.