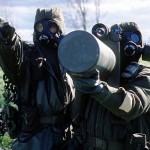 The world economy is threatened by a new strain of microorganisms. These so-called cyber pathogens spread via networks and the touch of digital devices. They can also lie dormant for days and months, only to spring to life when the victim’s immune system is at its weakest point. It is widely believed that cyber pathogens can infect the population of a whole country and wipe it completely off the grid of the Earth. Current antidotes can only treat the symptoms. The best way to get rid off the pathogens is to resort to physical means and destroy every surface it can cling to. Amputation of infected tissue also works. Unless security researchers will find a suitable vaccination soon, every single one of us is at risk.

The cyber pathogen threat is the reason for an alliance of famous three letter agencies. The Federal Bureau of Investigation (FBI), the National Security Agency (NSA), the US Department of Defense (DoD), and the Centers for Disease Control and Prevention (CDC) have announced to pool their resources in order to contain the spread of the microbes. Furthermore a research team will be created to study the characteristics of the cyber pathogens. Experts still lack the knowledge about the origin, ways of infection, metabolism, and possible mutations. However all experts agree that the pathogens require electric power, semiconductor material, and a way to transmit their DNA. Infection usually happens airborne (i.e. wireless), direct contact (i.e. wired), or by touch of infected tissue (i.e. storage media). Some cyber pathogens can also jump species. New life styles such as the Internet of Things may strongly accelerate infection rate and lead to a pandemic.

The FBI has announced that it will ask companies whose consumer products have been infected with cyber pathogens to cooperate. Chip manufacturers have offered their support by publishing ways to disinfect devices. The workaround requires to keep the temperature of processor and memory chips above 100°C / 212°F for more than one hour. It is also recommended to wear gloves at all times when working with keyboards or touch screens. Some people go to extremes and dump their cell phones and SIM cards after a couple of uses to get fresh ones. This strategy is highly recommended for everyone exposed to classified information. For some reason cyber pathogens are attracted to data that is being protected. Researchers believe that the high nutritional values of confidential data is the cause.

We are looking forward to hear more from the efforts to counter digital bacteria and other threats to mankind.