Quantum computing is a fashionable term these days. Some IT news articles are talking about post-quantum cryptography 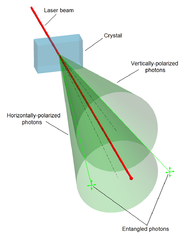 , qbits, and more quantum stuff. If you don’t know how the terms relate to each other, what entangled states in quantum physics are, and what everything has to do with computing, then you will have a hard time figuring out what it means for you and your infrastructure. The relationship to cryptography is yet another matter best explored after you know the basics.

Using quantum effects in computing and cryptography is already done. The best example are some hardware random generators which use properties of, well, the hardware to harvest entropy. And then there is quantum key distribution (QKD). It is a method to ensure secure communication between two or more nodes. Vienna even had a working QKD network named SECOQC which was created in 2008.

So how can you learn more? Our friends at Golem.de stage a conference about quantum computing on 23 June 2017 in Berlin. The conference is aptly titled Dawn of the Quantum Era. Leading experts will explain about the current state of quantum computing, quantum communication and quantum cryptography.

In one intense conference day, IT decision makers and those, who are interested in the future will learn everything that’s important about the very subject. Where does quantum mechanics stay and what has research so far brought to light? What is the current state of research in the development of quantum computers? What can quantum algorithms and quantum encryption do? And which challenges postquantity encryption has to face? These are just a few of the questions to be answered at the upcoming conference. Participants will also discuss which future technology is more promising: supercomputer or quantum computer.

Amongst others, Speakers include Prof. Dr. Vlatko Vedral from the University of Oxford as well as Tracy Northup from the University of Innsbruck, who holds the current quantum computer speed world record. Silicon Valley will be also represented: Will Zeng comes from the quantum startup Rigetti, in which known Venture capital investor Andreessen Horowitz has invested in recently. Stefan Filipp, one of the leading quantum researchers at IBM will also be present as a speaker.

The conference Dawn of the Quantum Era takes place on the 23rd of June 2017 at the Zoo Palace in Berlin. You can find the final programme on the conference’s website as well as the biographies of all the speakers and short abstracts of their talks. Conference tickets are already available.